The mystery of Edward Young Anthony’s ancestry and background is what first led me into genealogy.  My father was the only child of E. Y. Anthony’s own only child, had been raised in his grandfather’s home, and greatly admired him.   In the late 1960s, more than twenty years after Dr. Anthony’s death, my father began the hunt for his grandfather’s origins;  I joined the effort in 1972.  Unfortunately, much of what is in these pages was discovered after my father’s death in 1986.

In several records, Edward Young Anthony wrote that he was born 14 November 1870 in Tuscumbia, Colbert County, Alabama.  The same information appears on his death certificate.  Indeed, his mother was from Tuscumbia, and was enumerated there in the 1870 census just four months before he was born.  By 1880 his parents were back in Bedford County, Tennessee with Edward, age 9, in the household along with a sister and two brothers.

He Runs Away From Home

Dr. Anthony told his wife that he ran away from home after his mother’s death, but before his father remarried.  His mother died in early 1886..  The 10 April 1886 issue of the Nashville Christian Advocate notes the death of “Emma L. Anthony wife of Rev. N. A. Anthony, Tenn. Methodist Conference, born Feb. 3 1849; died Liberty, Tenn. Feb. 3, 1886.”1  If Edward Young Anthony left home soon after his mother’s death he would have been 15 years old; indeed, his wife recalled him saying he was “14 or 15” when he left home.  His wife also recalls him saying that his family had moved out of Bedford County to someplace on or near the Cumberland River, and were living there at the time he ran away.  Indeed, his parents were living on the Cumberland in Liberty, DeKalb County when his mother died.

In his two life insurance applications of 1913 Edward Young Anthony wrote that his mother died at the age of 36, his father died at 53, and that in 1913 he had two living brothers, ages 39 and 37, and two sisters, ages 41 and 35.2 Whether he actually had kept in touch with his family is doubtful, for his wife recalled his having no contact with family members.  He may have merely assumed that they were still living or guessed at the ages.  Note, though, that the ages of his brothers and sisters are consistent with the 1880 census, except for the youngest sister who (if living in 1913) could have been no older than 33.

According to my father, who grew up I his grandfather’s house, E. Y. Anthony told his wife and daughter almost nothing about his family or their background.  Neither his wife nor his daughter remembered his having any contact with his family.  He spun a somewhat vague story of running away from home, working on a railroad, and learning the blacksmith trade as a teenager.

He Moves to Texas and Marries

Unfortunately, the 1890 census is lost, but he was in Morris County, Texas by 1895, when he was 25 years old.  According to his wife, he was working at a blacksmith shop in Omaha when they met.  He married Lou Ella Witt in Omaha, Morris County, on 15 March 1896.  Their only child, Allie Anthony, was born 24 May 1897.  Her birth certificate gives her father’s occupation as “blacksmith.”3

He Becomes the Town Doctor

The January 1909 editions of the Omaha Breeze weekly newspaper carried a notice of rates charged by Omaha’s four physicians.  Office visits were 50¢ to $2.50 “depending upon the case”, while in-home calls were $2.00 during the day and an extra 50¢ at night.  Travel more than two miles from town was charged at 50¢ per mile.   He served as secretary of the county medical society for many years.5

My parents related a number of stories about Dr. Anthony.  He was widely considered to be the most educated man in town, and was apparently largely self-educated.  My parents told me that he was perhaps the only person in the county to subscribe to the Wall Street Journal, and may have been the only person in the town who owned an Encyclopedia Britannica (including the complete 1904 edition, recovered after his death by my father.) 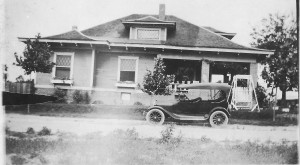 The Omaha Times published a photograph of a large house at the corner of Third and Sloss Avenues in Omaha which it identified as the home of “Dr. Edward Y. Anthony and Family in 1905”.   That would have been across from the Baptist Church, two blocks north of the railroad station.  His later home, on South Main Street opposite the old railroad station, was the site of a livery stable in the early 1900s.  On 28 October 1910, he bought lots 1, 2, 3, 4, and 5 of block 20 on South Main Street from the owners of the stable, J. T. and J. B. Beasley, for $7006 and built the house in which my father was born and raised.  His only child, Allie Anthony, remained in the house for the rest of her life and died there in 1977.  I spent several summers as a child living with both sets of grandparents, and particularly enjoyed this house and its proximity to town. 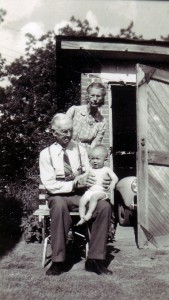 The last known photograph of Dr. Anthony, taken the summer before he died, shows me on his lap.

His death certificate, for which his wife was informant, gives the cause of death as “uremic poisoning” (a catchall for kidney failure) accompanied by “paralysis left side”.   His wife listed his father’s name as Nicholas Anthony and his mother’s maiden name as “unknown”.

The Omaha Times also published several photos in the 1920s and 1930s of his medical office and surgery.  In addition to the Omaha Times photographs, I have a number of family photographs which my father inherited after his mother’s death.  The earliest are photos taken of E. Y. Anthony and his wife in 1896 on their honeymoon.  A portrait of the couple is dated 1901, when he would have been 31 and she 25.  Several later photos are also in the collection, the latest a studio portrait apparently taken not many years before his death.

Their only child was: