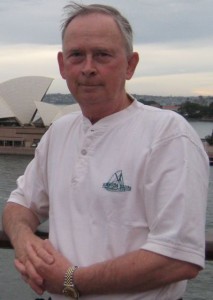 I’ve been active in genealogy, on and off, for more than 40 years. I became seriously addicted to genealogy while living in Salt Lake City in the 1970s, where I got started with a professional accreditation program offered at the LDS Genealogical Society and worked on my Anthony and Baird ancestry.  Since I retired in the Raleigh, NC area several years ago, I’ve been able to devote more time to this most rewarding and frustrating of hobbies.

My genealogical interests are fairly broad.  One of my early goals was to try to identify all my ancestors who were alive in 1776.   But I was soon diverted by the mysteries and dead ends that I uncovered.  I became interested in a large number of surnames and family lines.  Over the years, I’ve collected many file drawers of raw material.   Most of this is my own research, but I have also been fortunate enough to have been helped by many other researchers over the years. It makes sense to share this with others.

I’ve chosen to share most of this information in the form of tops-down narrative genealogies, much like the typical genealogy book. I tend to organize my raw material in this way for my own use, since it allows me to put the facts into perspective and to provide my own interpretations and theories. I am not a fan of genealogy software, and don’t use any myself. In my view, genealogy software is great for organizing people into family groups, but not appropriate for explaining theories or interpreting facts. It’s also awkward for dealing with uncertain relationships, conflicting records, and some other unavoidable aspects of organizing and interpreting genealogical records. To me, the fun in genealogy is not in “name collecting”, but in doing the research and wringing as much information as possible out of the facts.

One result is that I tend to get interested in families that aren’t particularly important in my lineage. Whenever I realize that a family has been ignored in print (or its lineages butchered) I can’t resist researching them. There are several “mini-books” on this site that resulted from those interests.

Most of my material is on this website in some form, and I am continuously adding to or editing the files here.  Please feel free to contact me if you see something you’d like to know more about, or if you have a suggestion for what to add next.

I have also written a number of short articles over the years on a variety of topics that bear on interpreting records of the colonial south and the early years of statehood.   Most of these articles are reproduced here.  I have a particular interest in colonial laws and customs, and have tried to share some of that knowledge.

Even if some of my files appear to be complete, don’t assume that I know it all. We all learn quickly that there is plenty we don’t know.Part of the fun of genealogy is that each new fact we learn tends to create another area of research. Please help me improve the quality of the site by contributing your own information, suggestions, and comments

I have a complete pedigree chart (of direct ancestors only) at the Family Tree DNA website.  You can access the tree, though it often is slow to load, at:

You can also view a more detailed family tree at ancestry.com

Alternatively, here’s a quick-and-dirty brace of pedigree charts,  one paternal and one maternal.   I’ve shown ancestors as far back as my great-great-great-great-great-grandparents — that’s seven generations removed.   Someone who shares an ancestor that far back would be my sixth cousin (or fifth cousin once removed or fourth cousin twice removed, etc.) which is typically beyond the upper limits of meaningful DNA matching.

In the event that some relative might want to join the DAR or some similar organization on the strength of an ancestor’s service, here is a list of my ancestors who qualify as veterans of various conflicts.

My Family FInder DNA kit result is entered into GedMatch and I have meaningful but quite distant matches to several hundred persons.   I can establish a specific kinship with only a handful of them, as the vast majority of the matches appear to result from a common ancestor five or more generations distant.   And one of the frustrations of genealogy is that almost no one can identify with certainty all of their ancestors five and six generations back.

In fact I doubt that most people could identify even half of their great-great-great-grandparents — the common ancestors of our fourth cousins.   Even after decades of work, I can identify only 28 of my 32 ancestors in the fifth generation (and possibly a 29th) but only a few more than half of the 64 ancestors in the next generation.  There are just too many wives whose maiden names can’t be determined, too many dead ends caused by lost or missing records, and too many unprovable relationships.