Andrew Barney Cook was the fourth child of Asa Barrett Cook and Elizabeth Winifred Ivey.  He authored his own brief biography in an 1889 publication.1 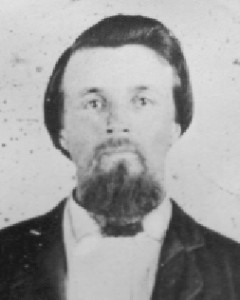 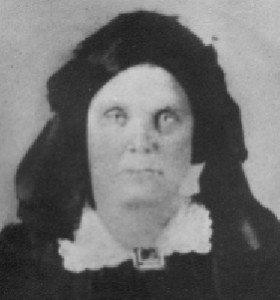 Andrew B. Cook, merchant, farmer, and founder of Cookville, Texas, was born in Macon, Georgia, April 3, 1836……Andrew B. Cook came to Texas in 1851, began farming, and continued in this vocation until 1862 when he enlisted in the Confederate army, and served until the surrender in Mississippi, Georgia, Alabama, and Tennessee.  At Oakland, Mississippi, a rifle-ball struck him in the shoulder, but notwithstanding the wound he afterward took part in many severe battles, such as those at Franklin, Holly Springs, Iuka, Lumpkin’s Mills, Murfreesboro, Nashville, Vicksburg and many other places.  He was twice captured; first at Franklin, Tennessee, and held eighteen days, and again near Pilot Point, Georgia and kept prisoner eight and one half months.  In 1867 Mr. Cook embarked in mercantile business at the little town of his own founding – Cookville, on the St. Louis, Arkansas & Texas Railway – but still continues farming, and now owns about one thousand acres of fine land, four hundred of which he has under cultivation, raising various or mixed crops.The marriage of Mr. Cook took place November 20, 1856, to Sarah G., daughter of Seaborn Rountree, a native of South Carolina.  Twelve children have been born to this union, and eleven named as follows…and one that died unnamed.  Mr. Cook is a consistent member of the Primitive Baptist church, and a good and useful citizen.

This is the only record I’ve seen of the date of his marriage to Sarah Gray Rountree, daughter of Seaborn J. Rountree and Elizabeth Rogers, although the fact of the marriage is repeated in the records of Seaborn Rountree’s family.

The remainder of the article, quoted earlier in the Asa Barrett Cook paper, contributed by his son, Rueben Cook, to the History of Titus County  generally repeats the same material:2

…Andrew Barney Cook was married to Sarah Gray Rountree in 1856.  Her mother’s maiden name was Rogers, and she was born in Woodville, Alabama and had one sister and several brothers.  Wiley Rountree lived in Mt. Vernon, Texas, and his sister Rebecca Ledbetter in Cusseta, Cass County, Texas…My father and mother had twelve (12) children, two of whom died in infancy, the others living to maturity…  [The remainder of this material is inserted below under each child.]My father, A. B. Cook, came to Texas in 1856 (sic) and settled on 160 acres of land given to him by mother’s father [This would be Seaborn J. Rountree] about half way between Omaha and Springhill, in Morris County [formed from Titus in 1875], where Lou and Lizzie were born.  They lived in a log cabin about 100 yards north of the road, and was pointed out to me on my only trip to Springhill Primitive Baptist Church.  My father would close his store at Cookville on one Saturday each month so he and Mother could attend services there…My mother and two children lived there throughout the Civil War in which my father served.  At Oakland, Mississippi he received a spent rifle ball in his shoulder, but afterwards engaged in several battles, such as Franklin, Tennessee and Pilot Point, Georgia, Murfreesboro, Nashville, Vicksburg, etc., and was twice captured and held prisoner at Franklin, Tennessee and Pilot Point, Georgia 8 ½ months.  One or two of his brothers were flag bearers and as their mounts were shot down, he grabbed the flag and carried it to victory.3  That is probably what gave him the title of Major.  After the war was over, he made one or two crops and then moved to Clay Hill (the P.O. name until it was changed to Cookville in 1880).  He had a shack for a store in the corner of the yard – about 8 by 12 feet.  Later he had a larger building almost adjoining the home on the West side, and later built a larger building on a corner of the business district layed (sic) out facing the railroad which came about 1879.   He had a well-assorted stock of goods – dry goods and groceries, boots and shoes, clothing, some drugs, especially Smith’s Bile Beans, Groves’ Chill Tonic, Calomel and quinine, name it and take it; and a large room added to back of store containing flour and salt by carload, bagging and ties, John Deere and Kelly stocks and plow points, sweeps, saddles, plow lines, single or double trees, etc.  After thirty years in this business, he sold out about 1895 and retired.  He had a quiet disposition, was charitable in giving ground for churches and schools, or anything else for the good of the community; kept his business and politics to himself.  Two of his famous sayings were “Honesty is the best policy” and “Doing well is hard to beat”.  His first residence was about 100 feet South of the “big road”, as it was called, now Highway 67 in almost exactly the same place, as it passes that particular spot.  As the family grew, he built side rooms until about 1880 he built a 7-room house with 2 stack chimneys to the South and in line with his store, facing the railroad.  That house burned down not long afterward – in August…

As soon as possible thereafter, my father built another house on the same spot and about the same size.  But after he and mother died, and my brother and sister who stayed with Mother, married and moved away, someone else acquired the old home and, I understand, made three or four cottages out of the material…

…The railroad came about 1879, the name “Tyler Tap”, then “Texas and St. Louis”, then St. Louis, Arkansas and Texas, and finally St. Louis Southwestern…My father gave Surveyor Capt. Dillahunty $100.00 to change the railroad survey from about 800 feet South of where the road now runs because it would have passed through his best farm…

The absence of early records of Titus County (mostly destroyed by the courthouse fire of 1895) make it difficult for us to obtain additional material.  However, according to a pamphlet published several years ago by the Hon. Wright Patman, Andrew B. Cook was the postmaster of Daingerfield in 1851 and the first postmaster at Cookville (which was called Clay Hill at the time).  His son Samuel A. Cook was also a postmaster.

I also found several CSA records in the Texas state archives.  They show that Andrew Cook was a private in the Anderson City Guards on the muster roll of 20 May 1861, and in the Spring Hill Reserves of Titus County on the muster roll of 13 July 1861.  He was a private in Company I of Whitfield’s Legion of the 27th Texas Cavalry (his older brother Jesse Cook the Captain), enlisting in January 1862 for twelve months.  He must have continued in service, but I found no other records.  The flag bearer story is not only repeated in the article noted in the above footnote, but also in his obituary.

Following is Andrew Cook’s obituary from the Mt. Pleasant Times-Review in 1902 (with several errors in typesetting and spelling) entitled “A Pioneer Gone”:4

A.B. Cook, of Cookville, Texas, was suddenly called hence Thursday night, Nov. 13th, at 11:30.  His fatal illness, neuralzia of the heart was of only two days duration, and while he and his physicians realized the danger he was in, his death was quite a surprise and a shock to all.

A.B. Cook, merchant, farmer, and founder of Cookville, was born in Macon, Ga., April 3, 1836, come to Texas in 1851, enlisted in the confederate army in 1862 and served until the surrender.  He was in Mississippi, Georgia, Alabama, and Tennessee.  At Oakland, Miss. He was severely wounded, but afterwards engaged in many severe battles such as Franklin, Holly Springs, Iuka, Lumpkins Mills, Murfersboro, Nashville, Vicksburg, and many others.  In the death dealing contest at Iuka, two brothers older than himself of Whitesfields Legion color bearers, each falling successively, a third, the subject of this sketch, grasped the bloodstained banner from the prostrate forms of his wounded brothers and bore it aloft to a glorious victory.5   At our state capitol says The Southern Home Magazine.  That group of heroes should be memorialized in bronze or granite, a parallel of which defies the world.

He was twice captured, first at Franklin where he was severely wounded and kept in prison 18 days, and again at Pilot Point and held a prisoner eight months at Indianapolis.

In 1867 Mr. Cook embarked in the mercantile business in the little town of his own founding, Cookville, Texas, and continued in that occupation until his retirement in 1896.  He was a consistent member of the Primitive Baptist church, having joined that church at the age of eighteen.  Almost as regular as the Saturday before the first Sunday of each month came, he would be found on his way to Spring Hill church where his membership has been for forty-eight years.

Major Cook had his peculiarities, yet those who knew him best loved him, and to know him intimately was to admire, respect, and love him.

He is in the 1860 through 1880 censuses of Titus County.  In 1880, he is listed as a dry goods merchant, with all but the first and last child in the household.

In the 1900 census of Titus County, he is listed as a “landlord”, with Doctor A., Reuben R. R., and Eva L. Cook still living at home.  His widow Sarah G. Cook is listed in 1910 with Doctor A. and Eva L. still at home.   Sarah G. Cook lists herself in both censuses as the mother of 12, nine of whom were living.  The three deceased children were two who died as infants and Samuel Asa Cook, who had died in 1894.  Sarah G. Cook died on 14 March 1915 in Cookville, of “poresis” according to the death certificate.

Reuben Cook’s comments about each of his brothers and sisters, made sometime in 1963 or 1964, are reproduced below in italics.6   According to Reuben Cook and others of the family, one of the two additional children who died as infants was named Joe Ivey Cook, the other was apparently unnamed.