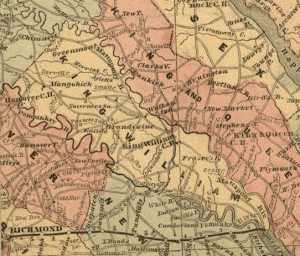 The Pamunkey Neck of Virginia encompassed the area between the Pamunkey and Mattaponi rivers, what is nowadays King William County, the southern part of Caroline County, and southern Spotsylvania County.   Most of the area had been initially set aside in 1625 as an Indian reserve, inside which white settlement was strictly forbidden.   Eventually, however, whites settled all around the reservation, whose boundaries had never been formally established.  Settlement in the area lagged the rest of coastal Virginia partly because the land was mostly inferior sandy soil and partly because it was so isolated from the established settlements along the York and James Rivers.   It was also dangerous; as late as 1675 a patent holder petitioned for an extension of the seating requirement from three to seven years due to “ye greate fear of ye Indians”.  But by 1655 several thousand acres at the river mouths had been patented and it wasn’t long before a few whites began settling upriver from the Indian lands.  Inevitably, whites encroached on the reservation and attempted to skirt the prohibition against buying land from Indians by signing leases instead.  By 1674 the Council and General Court found it necessary to attempt to outlaw leases from Indians.

Encroachment caused another problem because the boundaries of the Indian tract were poorly defined.  As part of a 1677 peace treaty with the Pamunkey Indians, the King formalized their reservation and agreed to grant the tribe a patent to their land.  The Pamunkeys, expecting to acquire formal title, began to sell large chunks of their lands in the form of 99-year leases to a few white speculators who subdivided and sold the land to new settlers.   These settlers could not obtain royal patents for their tracts because the Pamunkeys, not the King, owned the land.  That didn’t stop them from repeatedly petitioning the General Court for patents, a request that was finally granted in 1693.   But in the meantime the King had granted a huge tract above the reservation to the College of William and Mary, and had ordered that no surveys be made in the Neck until the College lands were surveyed.  Without surveys, no patent could be issued.

More white settlers were moving into the area claiming land in anticipation of patents, sometimes infringing on the rights of the settlers already there who claimed title to their land from the Indians.  Unfortunately, the King had neglected his promise to issue a formal patent to the Pamunkeys — or even to survey their lands.   Thus the titles to the Indian lands held by both Indians and whites were imperfect and their boundaries uncertain.   In 1699 the House of Burgesses appointed a committee to resolve disputes over land titles in the Neck.  The committee’s report, issued on 2 June 1699, recommended that fifty persons holding land by title from the Indian leases be permitted to patent their lands.1

The committee heard from eight particular settlers who claimed land rights by virtue of purchases from one Richard Yarborough.  Although the deed records are long lost, we know from the committee report that Richard Yarborough had obtained a 99-year lease from the Indians sometime after the 1677 peace treaty.  He probably had done so by 1679, when he was employed by the Burgesses as an Indian intermediary and interpreter.  Although Yarborough himself was dead by 1699, these eight persons together with Yarborough’s son John all claimed rights to specific tracts by virtue of purchases from him.  The eight persons were William Morris, John Oakes, William Rawlins, George Douglas (as orphan and heir of Robert Douglas), Peter White, Andrew Mackallaster, and two tracts claimed by — as the transcriber wrote — “Thomas (?) Hendrick.” 2

It seems clear that “Thomas Hendrick” was actually a mis-transcription of “Hance Hendrick”.   The abstracter, Lewis des Cognets, Jr, wasn’t sure of the name for he inserted a question mark and wrote it as “Thomas (?) Hendrick.”   All the other given names in the committee’s report were common in England, and des Cognets was surely expecting to find a common English name and not one as unusual as Hance.   To illustrate how easily someone could substitute “Thomas” for “Hance”, consider this entry for Hance Hendrick Jr. (the son of the immigrant) taken from the 1751 Amelia County tax list.   Most people would probably read this as “Thomas Hendrick”.

Further, it appears that the original document was not easy to read, as Mr. des Cognets also transcribed one of the other eight names on the same list incorrectly.  (He wrote “George & Douglass orphan”, whereas the patent was issued to George Douglass, orphan.)

We can compare the committee’s report to the resulting patents by the eight complainants, which are contiguous and quite clearly show that  “Thomas” Hendrick was actually Hance Hendrick.

The Pamunkey Neck was administratively part of New Kent County until 1691 when it became part of the new county of King & Queen.   The settlers of Pamunkey Neck almost immediately began petitioning to be split off into a new county.   Although the settlers were few in number, the area was naturally isolated by the two rivers that defined its boundaries making it difficult to conduct official business in the distant court of King and Queen County.   A petition dated 19 December 1700, signed by a mere 89 landowners, was finally granted.  An act to form King William County was passed in August 1701 to be effective on 11 April 1702.  The new county was named for the sitting King.